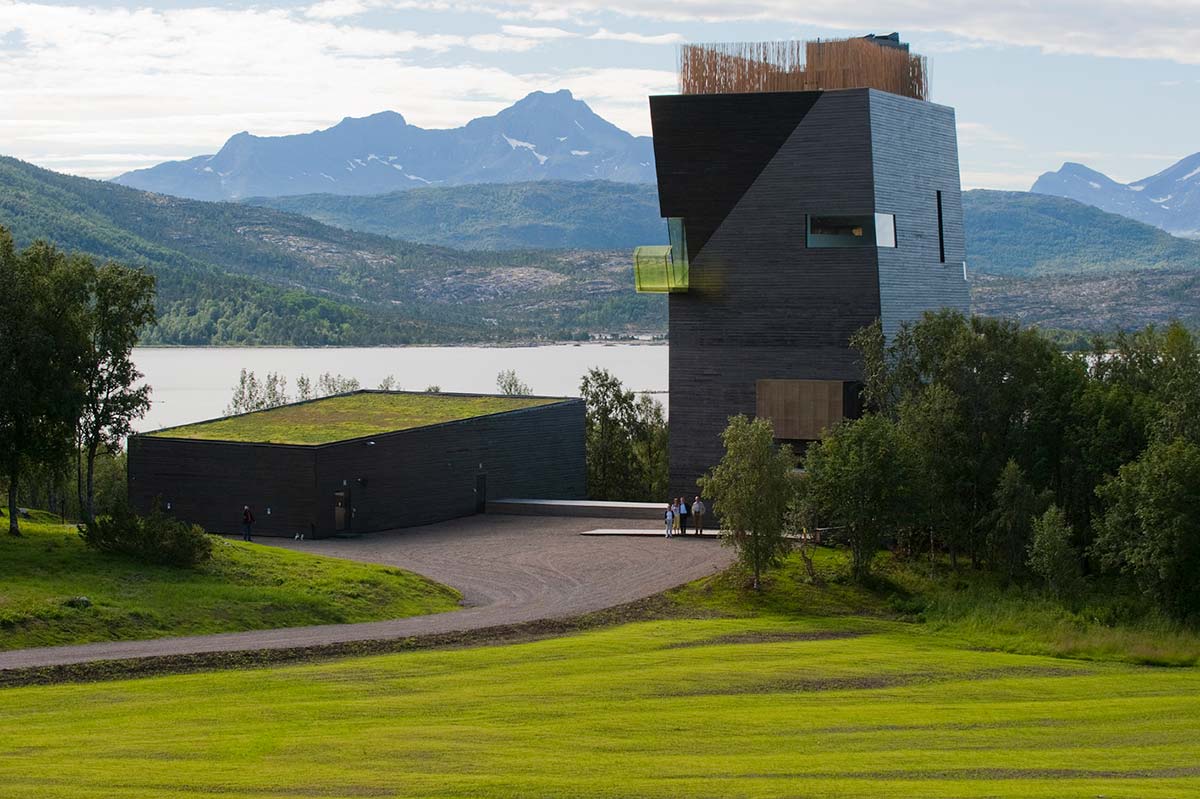 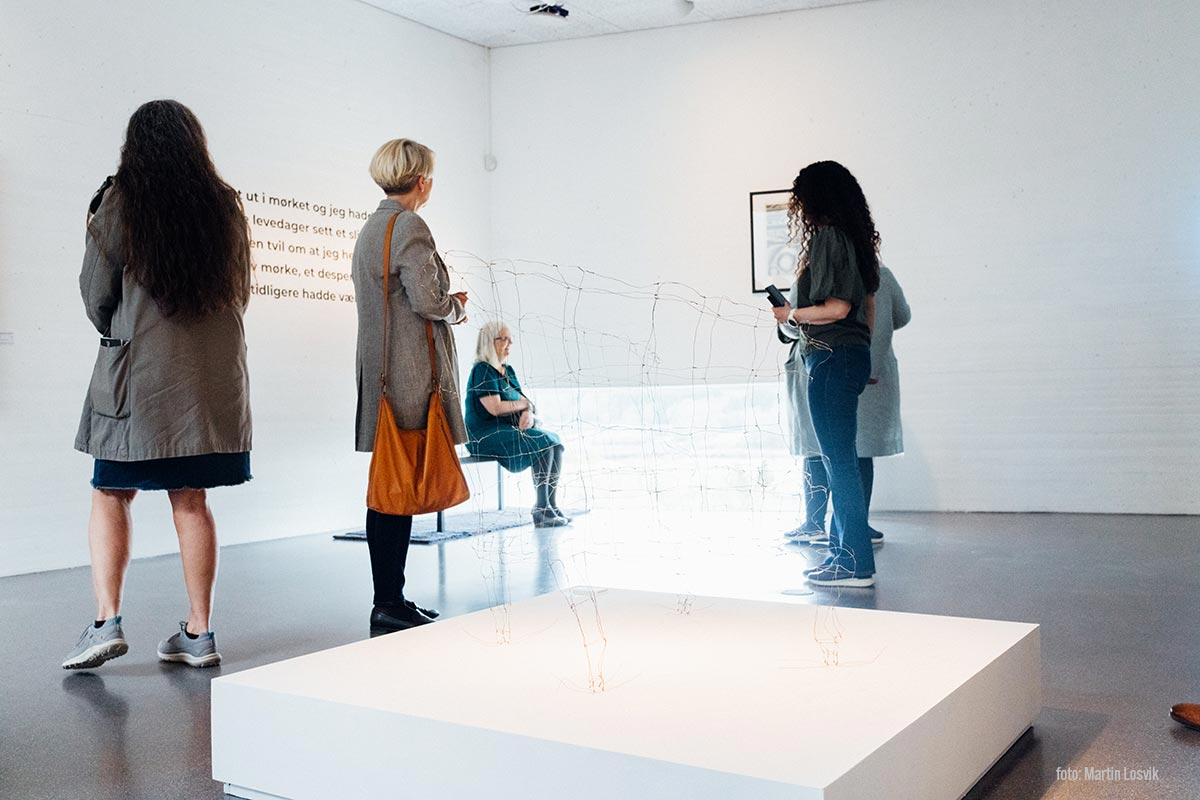 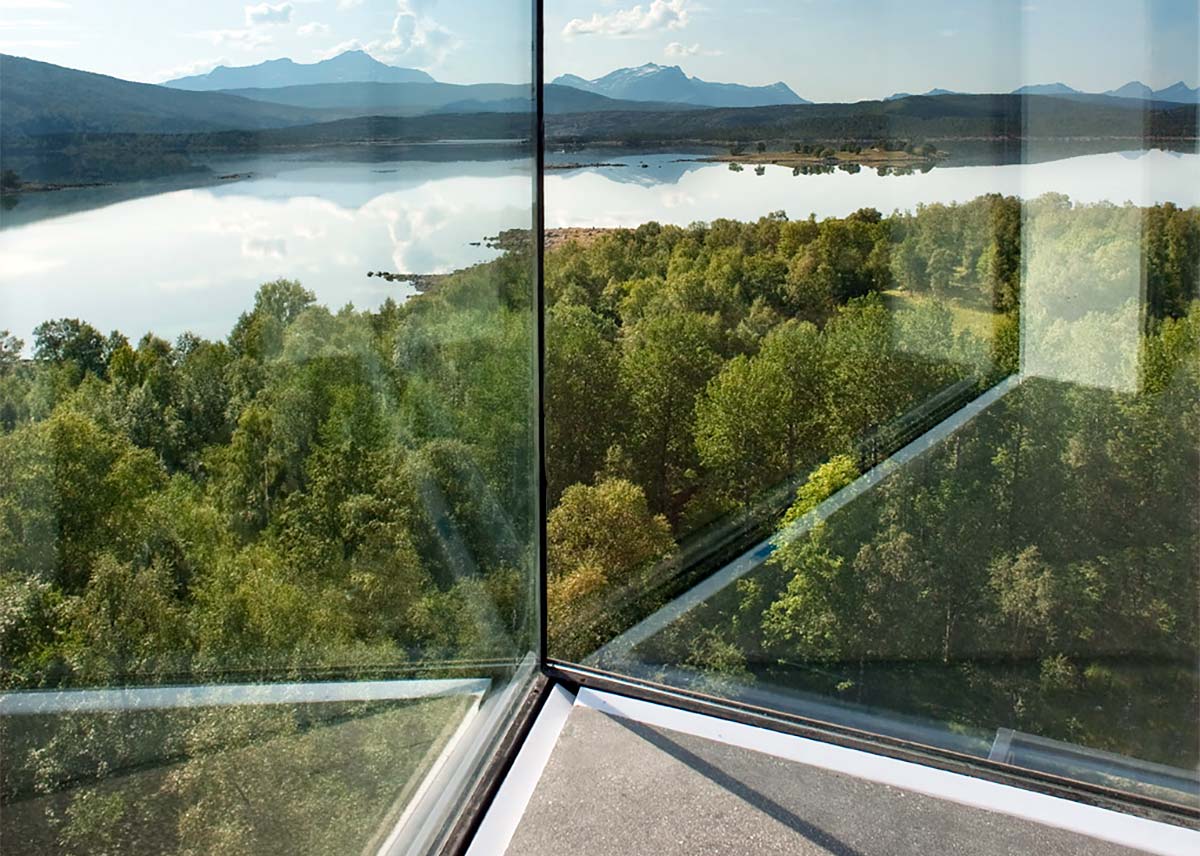 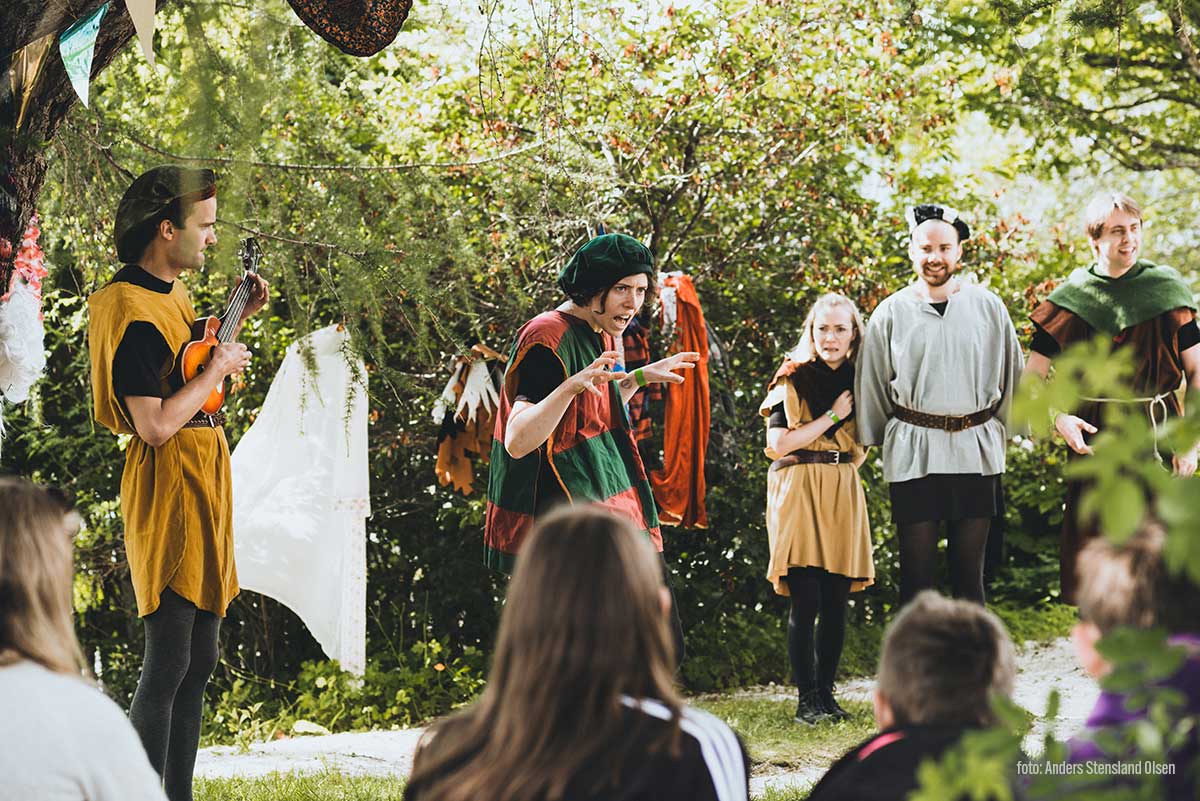 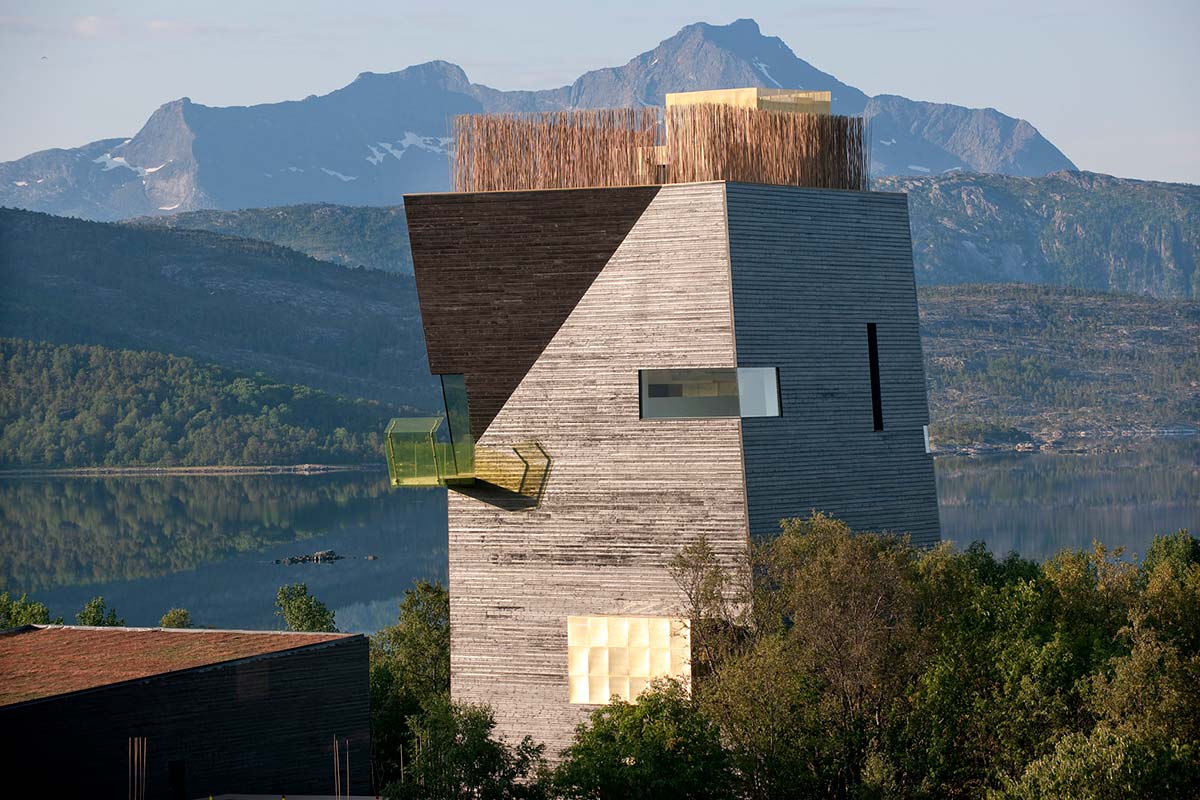 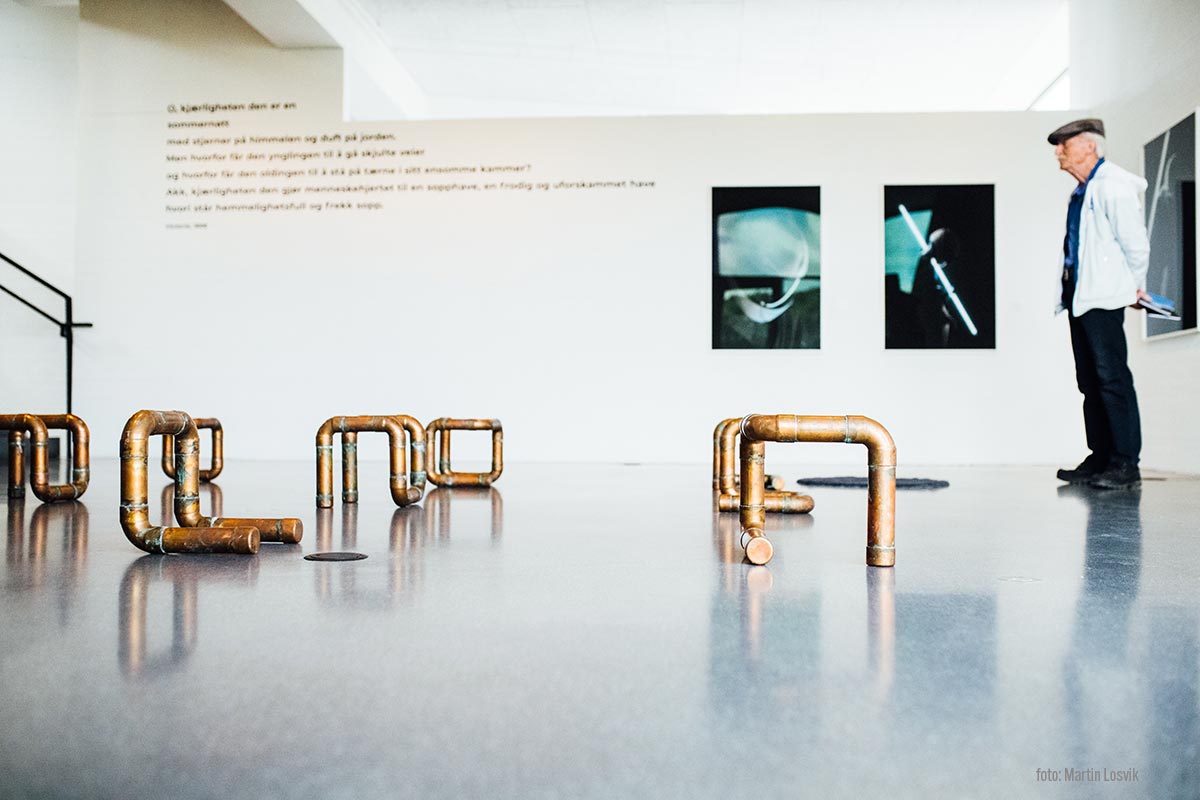 The Hamsun Center is the national center for author and Nobel Prize winner Knut Hamsun (1859–1952). The award-winning building is located in magnificent nature by the tidal current Glimma in Hamarøy, Nordland, right next to the place where the old rectory on Hamarøy was located.

There was a tower in front of me, I leaned against it and I saw it more and more clearly… I stand by this tower, I hear another: Come! And I go in. The gate was left open after me.

The center was designed by architect Steven Holl and was completed on Knut Hamsun’s 150th birthday 4. august 2009.

Hamsun’s novel characters have left traces in the building’s architecture. In the exhibition you can explore Knut Hamsun’s controversial life and literature. The windows and balconies encourage you to see and listen to the landscape in which Knut Hamsun grew up, and which has inspired world-famous books such as Pan,Growth of the Soil and Wayfarers.

Throughout the year, you can participate in, among other things, architectural walks, lectures, film screenings, debates, author meetings, concerts, and theme exhibitions.

Knut Hamsun’s childhood home is open in the period 27 June – 7 August, at 11–16. Take the chance to understand more of Knud Pedersen’s upbringing on the poor farm in Hamsund!

Feel free to stop on the way to or from Hamsund, in the outdoor area the trading post Breidablikk, an old trading post from the middle of the 19th century. The farmhouse is a converted Nordlandshus from 1860, with a beautiful northern Norwegian garden, barn with attached barn, barn, drying house and bed ceiling, and a storage cage. The pub “Teodor med brokk” in the barn room is open in connection with individual events during the summer season.

Hamsundagene is a literature and culture festival held every other year, first held in 1982. This year marks the festival’s 40th anniversary. Hamsundagene opens at the author’s childhood home as usual on 4 August with a speech at the bust on Hamsund. In the barn at Hamsund, there will be a vernissage with this year’s festival artist, Regine Hamsun (Hamsun’s granddaughter). Other events include: Skeiv litteratur, Munch meets Hamsun, StilleLytting, Omreisende Bokfest for de unge, bokprat and debates.

you will also find other great opportunities …

Camp Hamarøy The pearl in the heart of Hamsun's Kingdom Welcome to rent a cabin, an apartment or motorhome pitch at Camp Hamarøy. The place is ...
read more

Hamarøy village yard Handelsgården Breidablikk - a lot of history since 1845The old trading place Breidablikk, is located in the middle of the ...
read more

Sentrumsgården Motell Nice rooms in the center of Hamarøy We have 9 rooms, of which 8 double rooms and an apartment with 4 beds. All rooms are ...
read more
We use cookies to provide the services you have requested and improve the experience on the website.">Read moreConsentRefuse
Manage consent

This website uses cookies to improve your experience while you navigate through the website. Out of these, the cookies that are categorized as necessary are stored on your browser as they are essential for the working of basic functionalities of the website. We also use third-party cookies that help us analyze and understand how you use this website. These cookies will be stored in your browser only with your consent. You also have the option to opt-out of these cookies. But opting out of some of these cookies may affect your browsing experience.
SAVE & ACCEPT